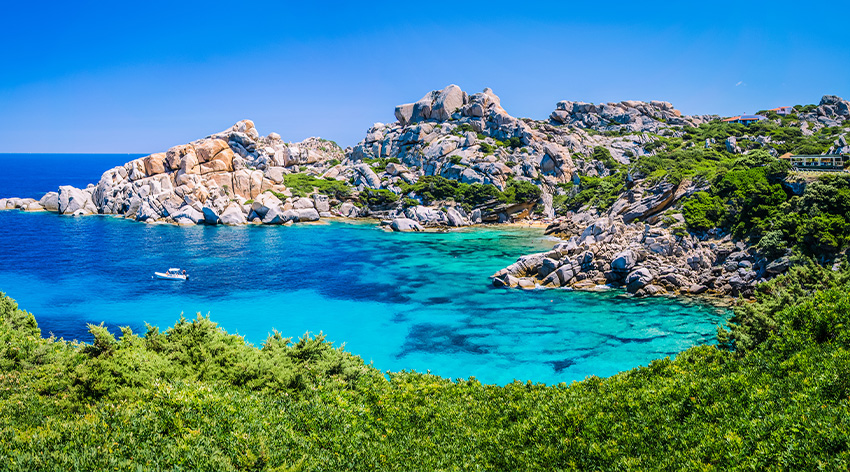 About 120 miles off the Italian mainland and in the center of the Mediterranean Sea lies Sardinia, an island known for its crystal clear waters and snow white sand.  Rocks on the island date back to the Paleozoic Era, almost five hundred million years ago! Mountains in the area are made of granite, limestone and sandstone among other minerals.

While most of the region is mountainous, there are no significantly high peaks due to long erosion processes, making room for the lush nature.  Although the organic landscape looks untouched by humans, Sardinia’s has a population of over one million.

Touring through the island you’ll find marshes, dense forests and small deserts. The seemingly undomesticated environment is an idyllic location for hikers and outdoor adventures. Much of the cultivable land is used for cereal and fruit crops, including wheat, barley, figs and persimmons. It is also hardly unexpected that seafood is a common menu item in Sardinian homes and restaurants given that Sardinia is the second-largest island in the Mediterranean Sea.

This site uses Akismet to reduce spam. Learn how your comment data is processed.

Started by Bari, Italy native John Flora in 1976, Flora Foods is a family-run business that provides the freshest quality Italian food imports at a reasonable price. We provide only the most authentic, Italian food products with all-natural ingredients. Flora Fine Foods offers GMO-Certified, Gluten-free and Organic options as well. Look for us in your local grocery Pasta or Sauces section in Publix , Wegmans, Costco, Whole foods and many fine stores. Follow us to receive authentic recipes and wine pairings. If It's Italian...It's Flora.